Luxury spirits packaging that speaks to a younger audience

Whisky packaging has traditionally gravitated towards the staid and conservative. Many blended Scotch whisky brands are well over a century old and the logos, labels and bottle shapes associated with them are closely intertwined in the minds of their loyal, mostly middle-aged consumers. What design agency, for instance, would ever jettison the famous Johnnie Walker Striding Man, the kilted Dewar’s piper or the iconic, square, black Jack Daniel’s bottle with its fluted neck?

Colour codes, typefaces and illustrations have also tended towards the traditional. Thus, Jameson, the world’s best-selling Irish whiskey, has always come encased in an Emerald green bottle. Many bourbons use rustic, old-time typefaces that wouldn’t seem out of place on ‘Wanted’ posters from the Wild West era. As for Scotch whisky, tartan patterns, shades of heather purple, oak cask browns, pot still copper hues are the go-to colours, while images of stags, pipers, dirks, royal crests and misty mountains occur again and again.

The cocktail boom and the birth of the craft distillery movement over the past decade have shaken up the rather staid world of whisky packaging, however. It’s increasingly common to see whisky packaging designs that deviate from the tried-and-trusted, and in many cases, clichéd cues of the industry. Whisky has become cool.

Take for example Compass Box, memorably described as the ‘bad boys of Scotch whisky”, whose whiskies champion the lost art of whisky blending. The company hired international drinks design agency Stranger & Stranger to create a series of highly intricate, often surreal, beautiful and sometimes startling images on expressions such as The Peat Monster and The Spice Tree.

A look at premium single-malts also reveals interesting deviations from expensive metal gift canisters, embossed gift boxes and even wooden cases. The Glenrothes has opted to package many of its whiskies in open, four-layer corrugated cardboard boxes. Fully recyclable and cheaper to ship, this back-to-basics approach allows the consumer to see the colour of the whisky inside and even touch the squat, round bottle. The message is not: “we’ve cut corners,” but “we care about the quality of the liquid inside the bottle.”

The Edrington Group took a similar approach to the packaging of The Naked Grouse—a premium blend containing high proportions of sherry cask-matured single-malt whisky from the iconic distilleries of The Macallan and Highland Park. Working with Allied Glass, The Edrington Group developed a clear glass bottle for the whisky with no label or secondary gift carton. Instead, the whisky inside the bottle was the hero, the classic Famous Grouse image being debossed onto the glass.

Whisky packaging is generally serious and earnest in tone. If anything, the craft distilling movement with its focus on authenticity and its attempts to define itself against larger, mass-produced competitors, has only intensified the spirit’s ‘serious drink’ status. However, as the success of irreverent, tongue-in-cheek wine labels such as ‘Arrogant Frog’ and ‘Fat Bastard’ suggests, there is an untapped opportunity for informal whisky brands that target Millennials’ well-developed sense of absurdist, self-deprecating humour. 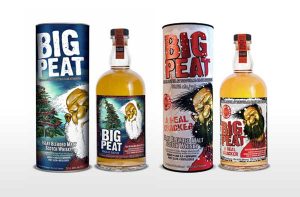 A rare example of a Scotch whisky brand that does tap into this consumer demand is Douglas Laing’s blended Islay malt Big Peat, which features a wind-blown, jumper-wearing Islay fisherman on the label. The fun character was the creation of Scottish design agency Pocket Rocket Creative.

The era of the smart whisky bottle is not far away. The Internet of Things (IoT) will allow brands to ward against counterfeiting while turning bottles into social media platforms and capturing valuable data about consumer behaviour. Near Field Communication (NFC) tags are a step up from QR codes as they don’t require an app to work and are harder to copy. When an NFC-enabled smartphone comes into contact with a tagged product, the tag wakes up, and launches a URL directly in the browser on the smartphone.

Diageo has already worked with Norwegian printed electronics firm Thinfilm to create a prototype Johnnie Walker Blue Label whisky which incorporates a NFC tag. The tag can be read with a tap of an NFC-enabled smartphone and is able to detect if a bottle is properly sealed or open. The technology will also allow Diageo the ability to send promotional offers to the consumer to make a repeat purchase, as well as cocktail ideas.

At Hunter Luxury, we realise that while much whisky packaging remains rooted in the traditional, reassuring cues, brand names, logos and stock designs that have anchored the sector for decades, other brands require a quite different, more contemporary approach to packaging design. So whatever your whisky packaging requirements, come talk to us.